It may sound strange for someone who is as picky of an eater as I am to like to try new things, but occasionally I do. I suppose things like Indian, Vietnamese and Korean aren't new anymore. I like them all. In Grants Pass there is one Korean Restaurant (its good but no one will go there with me) and one Vietnamese Restaurant (I wasn't impressed.)

Recently though there has been a Vietnamese food cart downtown called Sàigòn Xích lô. Its caused quite a controversy much like some of the food carts have in other cites. I have never gotten a chance to try the ones in downtown Portland, but there are a bunch with a wide variety of food types. I've hear Medford has a handful as well.

The main controversy with this cart is that he doesn't have a permanent place to park. They just park in an empty space on the street and move every two hours.Click Here for a news story about it. Personally I would like to see more food carts with a bigger variety of food. When I'm at work I don't like to go to a restaurant and sit by myself. I'd much rather pick something up to go and take it back to work or to home.

I've tried this cart a few times and had the first 3 items on the menu. All were pretty good. I wish they just had simple cheap Pho. That's what Grants Pass really needs is good cheap Pho... and Indian food. 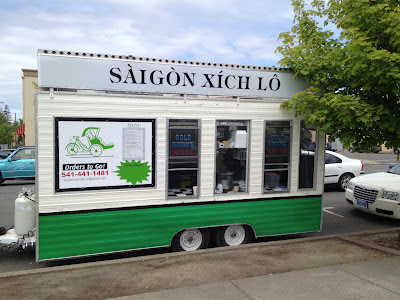 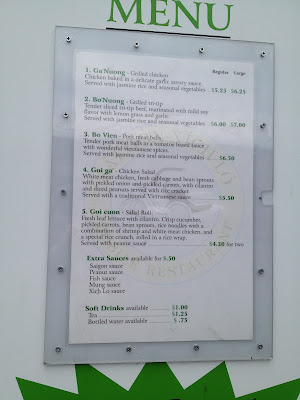 Posted by blazerfan at 11:13 AM
Labels: Food Carts

Thanks for posting the menus for Pho Sur and Saigon Xich Lo. I love Vietnamese food, but I haven't yet tried either place.

What don't you like about the food at Pho Sur? I heard it's owned by the owners of a Thai restaurant in town, so I was wondering if it's really authentic Vietnamese cuisine.

I've gone looking for Xich Lo a couple of times, but I never seem to able to find it.

Well I only tried Pho Sur once. I should probably give it another chance. I went with people trying Vietnamese for the first time and they weren't very open to it.

I didn't think the Beef Pho was very tasty. They served it in a giant bowl that was awkward. I don't know if they expect you to share or what. I prefer to get the noodles and everything on the side and put in what I want.

I think it is authentic enough. It is owned by the same guy that owns Hunan Garden I think, but managed by someone Vietnamese.

Love that viet soup! Can't have it spicy enough.
Great blog, I just added it to my recommended list.

Thank you, blazerfan. I will try them both. I've seen Xich Lo twice now on 6th St, but both times I was late for an appointment so I couldn't stop. One of these days, I'll get to it.

Tell me more about the Korean Family Restaurant. I've heard both positive and negative things about it, but haven't tried it yet either.

I went to Korean just once so far as well... I think I had #7 whatever it is. It was good (chicken, vegetables, rice) you could put some spicy house sauce on it to taste.

That was for lunch and found the place very friendly and clean. Honestly I haven't tried Korean enough to say if its good Korean. I always try something different and I never know what its called.

Lets just say I'd go back... and I'd probably try the Kalbi ribs