I can see for miles and miles...

Anyone who has gone caching with me in any different town has probably seen me looking for street names and having to turn around when I notice them too late. Well some of that may soon change as I got my new glasses today. I finally got tired of blury road signs and decided to go to an eye doctor... it is amazing how much I couldn't see. Maybe they'll even help me spot those tricky micros.
Posted by blazerfan at 2:43 PM No comments:

Yesterday was Pizza XLII and I thought we had a pretty good turnout for the first event of the year. Before the event Sally and I found a few caches

A new event is already planned for February, Pizza XLIII (Company is coming).
Posted by blazerfan at 1:47 PM No comments:

Over the weekend I went up to Portland to watch the blazers lose again. They are 1-2 in games I've attended this season. I use to remember every game I went to and could tell you how many they won or lost, but I've lost track over the years mainly because I've seen them play Sacramento so many times that I can't remember which game was which. My goal is to eventually see the blazers play every NBA team. So far of the 29 other teams I've seen 14.

On the way back I picked up 2 I-5 caches

The last one was a rare FTF for me. It just happens to be a SallyC cache she hid after coming down I-5 the weekend before and it was still unfound. Then I see today that I just beat Cheminer Will to it.

Later in the afternoon I went to a poker game and won $41 since I've lost the last couple of times it was nice to walk out with some money.
Posted by blazerfan at 8:52 AM No comments:

I've been working on the idea for a while. I needed a good FTF prize for the cache blazerfan & SallyC's Revenge. Obviously it needed to be something pretty nice. So I resurected and old idea I had for making geocoins in the ancient roman style and this was what I came up with 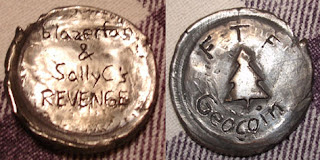 For those curious I made the coin using a product called Art Clay Silver. The clay is made of silver particles, organic stuff, and water. When its fired the clay burns away leaving 99.9% pure silver. I used 2 rubber stamps to press the coin but had to carve the lettering in as only the tree stood out from the stamp design. After it was fired I shined it up a bit and then I used an ultra nasty product call Liver of Sulfur to tarnish it. Then I polished it up and I think it looks pretty good.
Posted by blazerfan at 9:24 PM 1 comment:

Nothing Going On
STUMP HOLE

While I'm not off to a great start part of my new Years resolutions are to keep up my blog a bit better and hide at least one cache a month.
Posted by blazerfan at 9:33 AM No comments:
Newer Posts Older Posts Home
Subscribe to: Posts (Atom)