Today was the annual March for Babies. We didn't do as well as previous years for fundraising but we still managed to raise about $2500 as a team. I took the team pic so I am not in it. 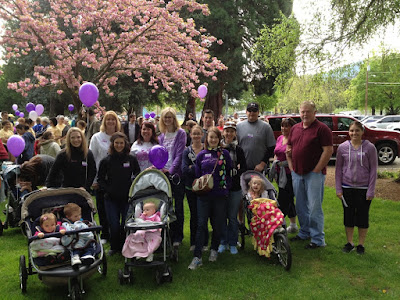 Posted by blazerfan at 3:30 PM No comments:

So I had heard a bit about Munzee its a lot like geocaching except you find a QR code you scan with your smart phone instead of a cache. Many people have been placing them on geocache containers. The one I found yesterday was hidden by Kelly in front of his work. Its the first one in Grants Pass.

While cell phone coverage has been growing there are still out of the way places that a Munzee just wouldn't be possible but a cache would. I can see them being much more successful in an urban environment.

I might put out one of my own and I'll probably scan them when I see one. As for seeking them out... probably not, but then again I don't even go geocaching much anymore.

My one cache a month streak is still alive

Sadly the container broke and I couldn't put it back as it was... just my luck. This was a hard one to grab even on a Sunday afternoon. Lots of muggles and an odd to reach hiding spot.

I spent most of my weekend power washing my deck and cleaning up the grill to start the season. All my deck furniture is out and I even got a new coat of water seal on all the rails while it was warm.
Posted by blazerfan at 9:35 PM No comments:
Labels: Geocaching

I still haven't found my cache for the month, but I'll get one before the end of April to keep me on my 1 per month average. Next month however I plan to blow that out of the water. I'll be taking a vacation to Eastern Oregon and Idaho. Should be able to pick up a few without trying too hard.

In other news the bank I work for has been sold. In the fall it looks like another system conversion. I'm not sure if I'll get to see it or not. Sometime in the next month I should know if I'll be let go. From what I know most of their IS is based in Seattle... that would certainly expand my geocaching area. I'm preparing a new resume and keeping my eyes open just in case. So if you know of any good jobs let me know.
Posted by blazerfan at 8:27 PM No comments:
Labels: Geocaching
Newer Posts Older Posts Home
Subscribe to: Posts (Atom)