I should be able to find a few caches this weekend and perhaps a few the weekend after when I'm in Albany. But what I am really looking forward to is the 9th through the 12th when I'll be in Las Vegas. Most people probably focus on the casinos and nightclubs... but I've been focused on the geocaching. There will be plenty of time for gambling after dark. Oh sure I have to attend a conference for a good portion of the day but I should be able to get a few caches in. I'm even trying to plan a bit of a road trip.
Posted by blazerfan at 10:00 AM No comments:

I did it... I went skydiving. Yes me, the guy that doesn't even like to climb ladders or walk down steep hills. I've never even flown in an airplane before.

So this was all my friend Dave's idea. For some reason he got this idea in his head that before he got married he was going skydiving... and for some reason I agreed to go.

The process was easy enough. We drove up to Molalla and signed a bunch of waivers... then we paid our money and went through about 15 minutes of training. After that we waited forever and finally got the call to go suit up. I told my guy I was not a big fan of heights and could never jump on my own... he said not to worry he'd jump and I'd go with him. Soon we loaded on the plane like a bunch of sardines... we climbed to 13000 feet and they opened the doors. The experienced people jumped first and I scooted down the bench. My instructor told me to walk toward the door turn toward the cockpit and that he would step left and I'd follow... and thats what we did. After tumbling a bit we steadied out and it was amazing. After a few seconds of freefall (120 MPH) he pulled the shoot and we floated softly back to the earth. 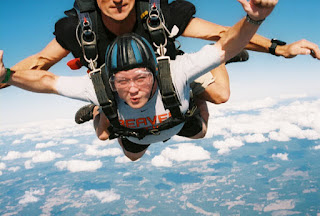 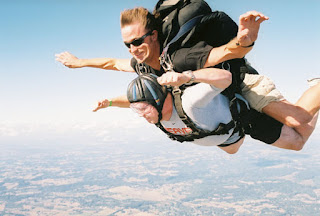 Here is a picture of Bobby lake from an area near the cache. 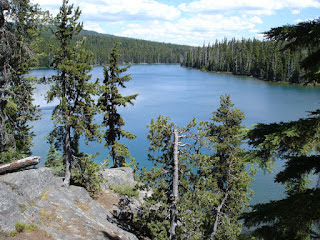 And a picture of a small island on Waldo Lake... would be a great place for a cache but is too often full of muggles. Posted by blazerfan at 10:13 PM No comments:

I went camping to Waldo Lake over the weekend. Found a few caches while I was out

I loaded the nearest 300 caches to the lake in my GPS but didn't have any real plan's except for hiking to Bobby Lake for the new Bobby's Booty cache. I was a day late for the first find on that one. Stopped at the store in Oakridge and decided to check the GPS... sure enough there was a cache just a couple hundred feet away on Crestview St. On the way back we stopped by the Diamond Peak viewpoint and ran into a couple of geocachers... one of whom happens to be the sister of Beaver Lover. I'll post some pictures later.
Posted by blazerfan at 8:28 AM No comments:

Adventures in the sky

I've been a lot of place in Oregon and to several states but I have never flown in an airplane. Not even a short trip. Some people find that amazing. I don't really... all my family lives close and I've always been too poor to travel far. However, a conference in Las Vegas is coming up and I have scheduled my first airplane flight for September. Well that was the plan until today... today I got booked on a much different flight.

My friend wanted to do this before his wedding... so I agreed. On August 25th I get the rare distinction of jumping out of the first airplane I ever rode in.
Posted by blazerfan at 2:11 PM No comments:

Well today is my 30th birthday. I don't really feel 30... well except my left arm has been pretty sore lately and I can't see a thing without my glasses anymore.