The story of a Cache

Its been almost 6 years since I hid my cache Haines Apple Tree. I hid it with SallyC just before Iseek's (once) annual Wilderville event.

When I first started geocaching this was the first place I wanted to hide a cache. My grandpa had shown me this location years ago and its the kind of out of the way historical item that makes geocaching so much fun at times. However at the time it was already the location of a virtual called They Didn't See it Coming. J-Freaks who hid that cache had quit the hobby by the time I started. I spent a lot of time looking for a few of their missing caches. One of these caches was called Over the River and Thru the Woods. It was a multi cache and after confirming the final was gone I collected the first two stages which were mint tins. I used one of these tins for this cache after the virtual was archived.

Despite a recent DNF it is still there pretty much in the same spot SallyC and I left it. The marker itself is a bit crooked and the site is as overgrown as ever. Without giving away the details the apple tree itself is generally considered the second oldest in Oregon being planted somewhere around 1852-54... and it still has apples... 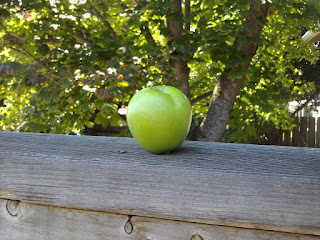