Well Sunday my friend Dave and I had planned to go to Portland to look around for Christmas gifts and watch the blazer game. Sunday morning at about 9am I ventured out into the cold and started my trip north. Usually I only worry about the montain passes as far as weather goes, and they were clean and dry... not a problem at all... after that I figured I was home free... wrong.

Now I've driven I-5 many, many times in all sorts of bad weather. I've seen mini tornados of hale in the freeway near eugene before, rain so hard you could not see, snow and wind... I've driven through them all. On Sunday however I saw something new... freezing rain. Now its really nothing new... it happens sometimes especially up in Portland... I've just never actually encountered it myself.

When I saw the first sign mentioning wrecks and freezing rain I should have probably turned around... but of course the blazer game was calling me. Soon I came up on the stopped traffic and waited... and waited. A semi truck from the south bound lane had slid into the north bound from what I could tell. The road at this point was wet but not icey... at least were I was. After a bit I got passed that wreck and was able to travel along at about 30-35 mph until coming up to the next wreck... an SUV that had rolled. Traffic was stopped there too and after several minutes I got though that one... had I-5 south not looked 10 times worse than North I would have turned around about then. I came up to stopped traffic once more, but never saw a wreck. I pulled into Sutherlin to get gas and when I stepped out of my car I almost fell down because I was walking on ice... I was second guessing myself but knew it was either continue on or wait it out where I was... I wanted to go to the Blazer game so on I went.

In between these time periods I had a chance to flip through the radio stations and listen to the Seahawks try there best to lose. In between about each play they would interupt to give weather updates... "wrecks along I-5"... "I-5 South closed"... "Freezing rain in Springfield"... by the time I was in Sutherlin Seattle had pulled it out and conditions were improving in Springfield.

Traffic was slow, but I-5 north was moving and I saw no more wrecks on my side. On the South bound side however I saw at least 6. Eventually I made it to Cottage Grove and stopped to eat. Mmmm... Arby's. By this time the freeway looked much better and I made the drive to Albany in a reasonable time. So when I got to Albany I had been driving for just over 5 hours. I met Dave there and since the freeway had been so much better, we decided to keep going.

The trip from that point went pretty well... we came past Salem and all was clear. We were just a few mile outside of Portland when things seemed to get worse. First there was some snow/ice at the side of the road, then slush between lanes... soon were were driving on packed snow/ice. At this point I was all about turning around... we weren't really in a position to get off and the roads off of I-5 looked worse than what we had... we slowly continued on at about 4mph. By this time I was sure glad I own an AWD as other cars were slipping and sliding, many pulled over and chained up, others were abandoned. As we got closer to PDX the traffic thinned and we made it to the Rose Garden... at this point we thought the west garden garage might be where we would stay the night.

Now I need to back up a few blog entries to remember winning free blazer tickets that weren't waiting for me... well this time we were picking up Dave's free tickets... if they were not there we might have gone postal. This time we were not disapointed... free tickets were waiting... regular price $131 each... sweet! Turned out not to matter... the crowd was so small after the first quarter they told everyone to come on down and sit closer... that was cool... we sat center court just a few rows back... best seats ever. Crowd was counted at 2923 and the blazers played to win for once... final score 97-92 blazers.

On the way back ODOT had come through for us... the road had some fresh sand/gravel and we made it to Corvallis without problem. I only found one picture that kind of shows the road conditions in Portland (it is from thismorning... looked worse last night)... it was quite a trip 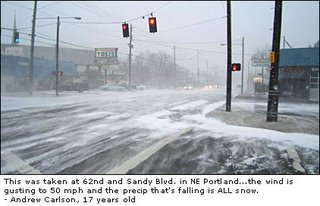